Comparing Airports Near Disneyland – Which Should You Fly to?

Wondering which airport to fly into when visiting Disneyland in Anaheim California? 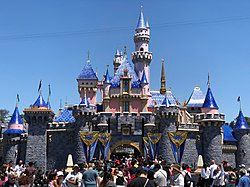 Many decide to fly into LAX when visiting Disneyland, but don’t realize they have four other options within driving distance (some are even closer than LAX). If you compare flight deals for all of the airports near Disneyland, you might find an even better deal or perhaps even a mistake fare if you stay on top of flight searches.

When picking an airport, make sure to keep all factors in mind (potential traffic, price of transportation, length of drive, etc.) If you fly into Burbank at 4 PM on a Monday, good luck making it to Disneyland within 3 hours. This also depends on your personal preferences – some people would rather pay $200 extra to save a couple hours of driving time.

We don’t recommend getting your Disney day pass for the day you fly in because your flight could be delayed, not to mention the likely potential of traffic slowing you down. Early mornings and late nights are the best times to fly in. That said, here are the top airports to consider when flying to Disneyland.

Los Angeles Airport (LAX) is approximately 34 miles away from Disneyland, and the journey takes an average of an hour in regular traffic. It can be slightly under if there is little traffic, or as long as 2 hours in very bad traffic. Many people think LAX is the airport closest to Disneyland because this is where everyone seems to fly into, but it’s actually one of the furthest!

People choose this airport because flight deals are great in LAX (most major airlines fly here). Even so, you can find deals at the airports listed below as well. Since it’s huge, LAX can be a big hassle when it comes to security. Some people only fly here when they pack minimal luggage.

This is the largest airport in the region and rental cars here are cheaper compared to the other airports near Disneyland. Shuttle services and ride sharing platforms like Uber and Lyft are also available. Prices vary depending on the time of day and traffic situation, but it can easily cost $50–$60 and up for a ride sharing service. Taxis are the most expensive and would cost around $100.

John Wayne Airport (SNA) is located in Irvine and is the closest airport to Disneyland. At 15 miles away, the drive to Disneyland takes around 20 minutes. This is definitely the airport to choose if you want to spend the least time traveling in a car.

On-site car rentals are available and you can also opt for shuttle services or transportation network companies like Uber and Lyft. A ride from John Wayne Airport to Disneyland typically costs around $25–$35.

Long Beach Airport (LGB) is 18 miles away from Disneyland and typically takes 30–45 minute to drive there, depending on the traffic. Like the previous airport, Long Beach is small – getting in and out of security is quick and convenient. However, this airport is known for their pricey rental car companies, so you might want to try LAX if you need to rent a car.

Uber and Lyft costs around $35–$40 each way, while cabs offer a flat rate service of $66 to Disneyland.

Ontario Airport is 35 miles away from Disneyland. This airport is smaller and much easier to navigate. However, it’s still fairly far away from Disneyland – we’d only recommend it if you find a deal even better than LAX. Sometimes, traffic can be even worse when traveling from the Ontario airport to Disneyland.

Uber and Lyft provide cost around $50–60 to get to Disneyland, while taxi service fares are approximately $100 (as always, this depends on traffic conditions).

How far is Burbank Airport from Disneyland? Burbank Airport is the furthest from Disneyland at 41 miles and can easily take over an hour depending on the traffic. Plus, Lyft or Uber fees will be most expensive here. It’s not the ideal airport to fly into for Disneyland unless you can score an incredible deal or plan to stay closer to central Los Angeles during your trip. This is the airport you should fly to when visiting Universal Studios!

Several companies provide ride sharing or airport shuttle services from Burbank airport to Disneyland, but a taxi will be quite expensive since it’s further than other airports. Uber and Lyft is pretty expensive too, it typically costs $65–$75 to get a ride to Disneyland.

Should I Get a Rental Car?

Renting a car depends on your vacation plans and needs. If you want to be able to eat at restaurants outside of the resort and visit other tourist areas in Los Angeles, renting a car is the way to go since public transportation isn’t the best. Plus, Uber and Lyft fees can really add up. However, if you’re just visiting the theme park and resort hotels, you won’t need to rent a car. Plus, public transportation services are do-able (it’s become much easier with the new Metrorail). There are also free public transit buses that service the Anaheim area.

What is the closest major airport to Anaheim CA?

John Wayne Airport (aka Orange County Airport) is the closest at approximately 15 miles away.

Is there a free shuttle from LAX to Disneyland?

Unfortunately, There is no free shuttle transportation service from LAX to Disneyland.

How much is the shuttle from LAX to Disneyland?

From LAX to Disneyland, a shuttle bus would cost about $80 per person for a roundtrip. There is also the Disneyland Resort Express, which is a large bus shuttle that caters to SNA and LAX airports. Round trip tickets for the airport express shuttle from LAX cost $48 per adult and $14 per child.

How do I get to Disneyland from the airport?

You can either opt to call an Uber or Lyft, take a taxi, rent a car, or ride an airport shuttle (from any airport).

With four airports near Disneyland, it can be difficult to make a choice while keeping price, travel time, and other important factors in mind. This is where Cheap Flight Alerts can help – we send daily email alerts for deals at your preferred airports. You don’t have to worry about scouring the web for deals every day.

Find out about new requirements to expect once vaccines become widely available, and when we might hope to travel overseas again.

Quick summary of the most important topics and frequently asked questions about Atlanta ATL International Airport.